Fireworks on New Year’s Eve have become an international tradition, with displays such as London, Sydney and New York being watched by millions around the world.There is nothing quite like seeing the New Year in with family and friends, celebrating the year that has just passed and looking forward to what the next year may bring.

Firework displays have become a core part of New Year’s Eve celebrations, and many love the moment of counting down the last few seconds until midnight, then sharing that New Year’s kiss under a showering display of fireworks before all joining hands to sing Auld Lang Syne.

So join us this year by celebrating with fireworks! Whether you want to watch on TV, go see a display or host your own, below we’ve put together a guide of everything you’ll need to sort out your New Year’s fireworks.

Shows that are broadcasted 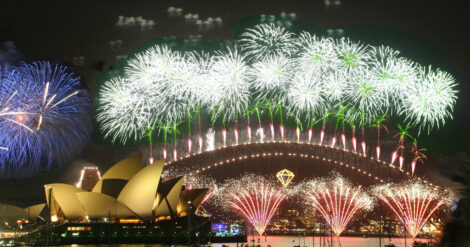 Sydney’s New Year’s Eve display is certainly worthy of its international reputation. Each year they stun people around the world with their fantastic night of shows and events, finishing their year with a world-class firework display.

Their events will begin from 6pm (7am GMT), with various shows and entertainment carrying on throughout the whole night, the whole thing being streamed and available to watch from their website.Their two most notable displays beingthe Harbour of Light Parade at 9pm (10am GMT) and of course their Fireworks Display at midnight (1pm GMT).

Harbour of Light Parade: Sydney Harbour is illuminated with ships gliding across the water, enchanting spectators of all ages. Each vessel is decorated with colour changing light, dazzling the crowds and adding to the unique choreography as they dance in the harbour.

Main Display: at the stroke of midnight, Sydney celebrates the start of their new year in spectacular fashion. The display features a huge range of pyrotechnic effects launched from firing points on the Sydney Harbour Bridge, Sydney Opera House and barges in the harbour. The effect over the water is simply stunning and shouldn’t be missed.

When it comes to celebrating New Year’s Eve, not many cities can do it better than our own London display. This year, our display is celebrating London’s relationship with Europe, supporting more than one million European Londoners living in the city.

The London New Year’s Eve firework display lights up central London every New Year’s Eve with a dazzling spectacle of pyrotechnics. Fired from the London Eye and River Thames, it is a truly dazzling sight to see.

The show includes specially designed hardware which attaches to the outside of the London Eye pods. There are also many barges lined along the River Thames, ready to fire into the night’s sky, illuminating the city and reflecting off the river. This hugely popular event sells out fast, but is also broadcasted on TV where many families across the UK will be watching in awe.

The third and final show that is a must to see is the renowned display in New York City. Being set off at 5am UK time, it would be impressive if you were able to stay up to watch it live. But certainly this is one to try see online when you wake up on the 1st, maybe after a much needed cup of coffee!

Fireworks are set off all over the city and against some iconic backdrops, including Times Square, Brooklyn Bridge and of course the Statue of Liberty. The city is lit up with stunning bursts and state of the art effects. Certainly not one to miss.


There are plenty of firework events for New Year’s Eve around the UK, the most famous being the London if you are lucky enough to grab a ticket! But for those who will find London a bit too far to trek, then most towns and cities will have a local event for you. It may be a community event that is open to the public, or it may be a ticketed function which has a party package for you. Either way, a quick search online will show all your local events and will help you plan how best to celebrate your New Year’s Eve.

Host your own Fireworks Display


Alternatively, it doesn’t cost as much as you might think to have your own fireworks display, especially if you’re hosting a party and able to share with family and friends.

That’s where we can help you!

With the year racing to a close, now is the perfect time to take a look at our Special Offers and find out how we can help with your firework purchase this New Year. We would suggest buying our single fuse barrages which will be impressive, easy to light and won’t leave you and your guests standing around outside for too long. They are known as being a display in a box and don’t disappoint!

You can legally let off fireworks until 1am on New Year’s Eve, however it is always a good idea to advise neighbours of your plans so they aren’t surprised and can make arrangements for any children or pets.

Please don’t hesitate to contact us if you need any help or advice, and we will do all we can to accommodate your firework needs.

From all of us here at Dynamic Fireworks, we want to wish you a very happy new year.

Fireworks you must have for New Year's Eve