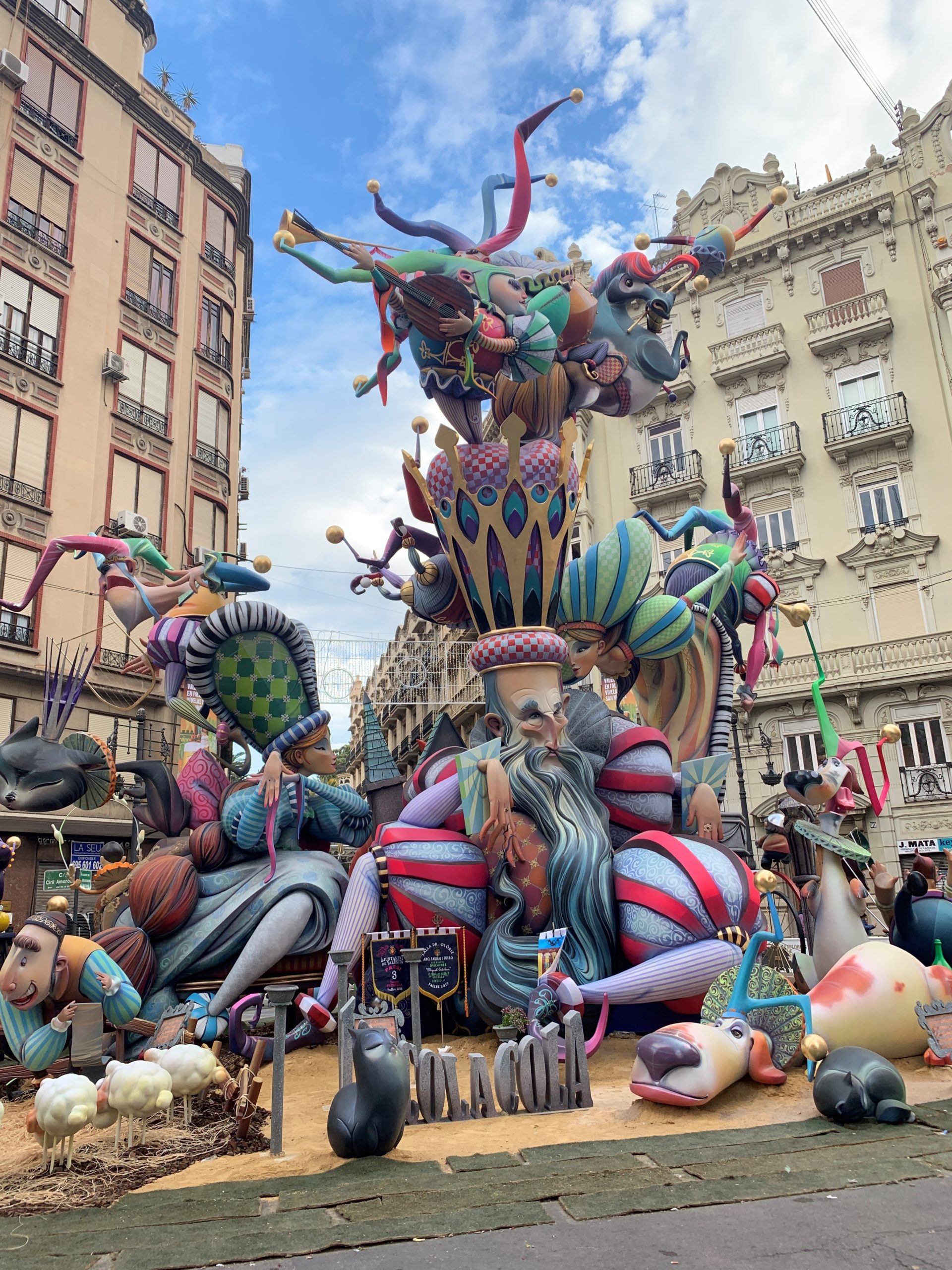 As soon as one year’s festival ends, each neighbourhood begins to prepare for next years, holding various meetings to decide on what next year’s Ninots will be based around. There is always a theme, it can be satirical with politicians, celebrities, and characters from books or movies taking centre stage, these are then designed, built using timber structures to support these sometimes 6 story constructions, which the figures are shaped from foam resin and painted by professional Falla artists over several months, and then on the 15th – 16th March these are moved into position in the city, often roundabouts and crossroads, in an event called La Planta. This is their home, but only for a few days, as they will almost all meet their fiery demise on the night of the 19th!!

On the 18th, the people from the city have their vote to save their favourite Ninot from the fire, and the winning one each year gets to go to the Museum of Las Fallas, and stored alongside winners from previous years, this museum is well worth a visit outside of the festival itself as it contains Ninots from the last 80 years!.

Fireworks, bonfires, and other decorations

As well as fireworks and bonfires, each neighbourhood decorates its streets with lights, the best one to visit is the Ruzafa area of the city as this has some of the best LED light shows to be seen anywhere in the world. These are situated in Calle de Cuba, Calle de Puerto Rico, Called de Sueca and Calle Literato Azorin, which are all conveniently located next to each other.

These light shows are run alongside music and take place 4-5 times a night for the last 4 nights of the festival, take a stroll down these streets and sample some amazing street food and drink, or alternatively, find a nice café or restaurant (there are hundreds to choose from) and pull up a chair and watch the world go by 😊

You will have gathered by now that fire features heavily in this festival, but Las Fallas also includes an offering of flowers.

This involves parades of people in traditional Spanish costume, marching through the city and often accompanied by marching bands, taking flowers to be offered up to the Virgin in Plaza de la Virgen. These flowers, traditionally red and white carnations, are used to adorn a statue of the Virgin Mary herself. The offerings take place on 17 – 18th March, from 3.30 pm at Calle Sant Sant Vicente and Calle de la Paz. 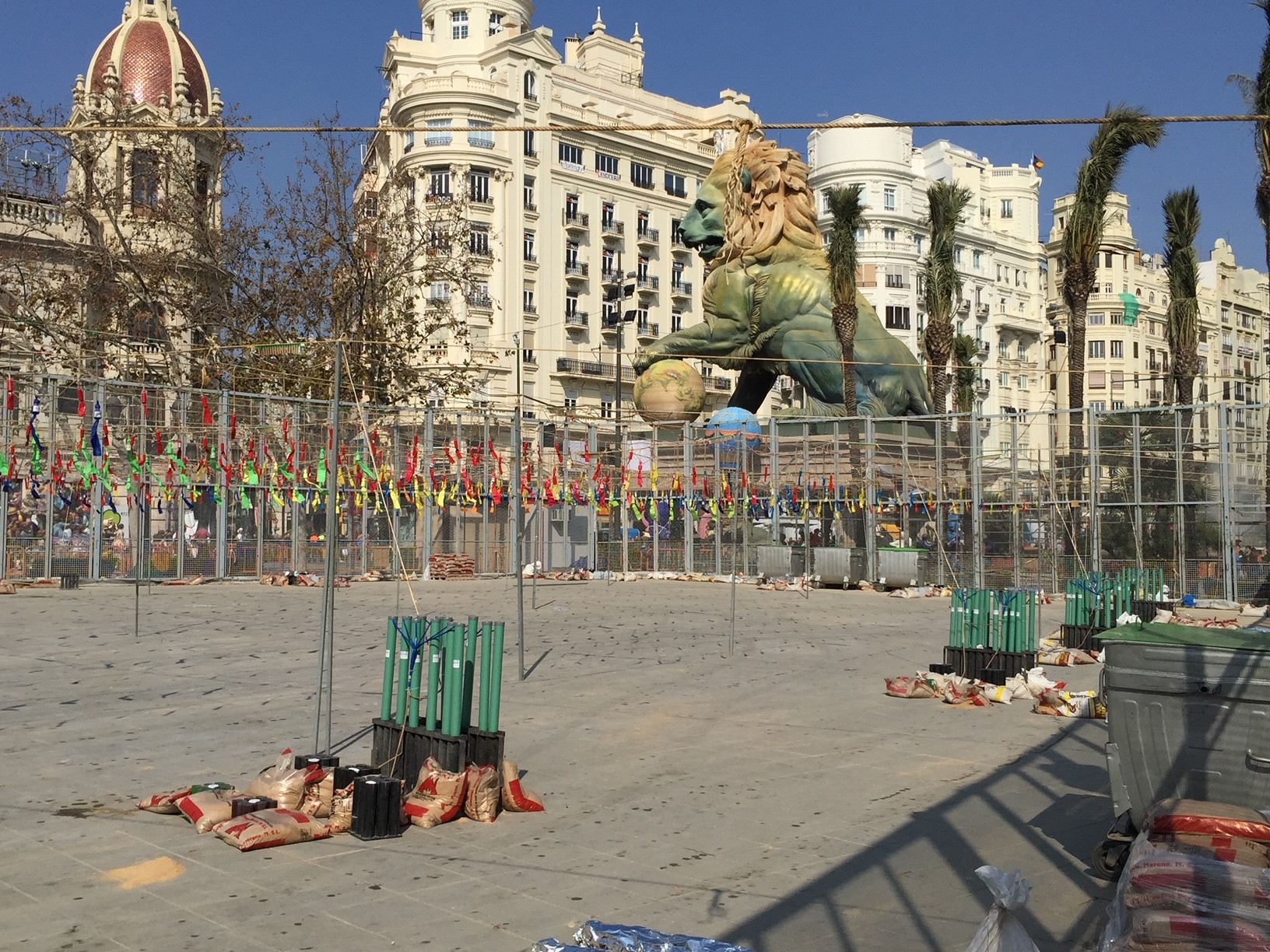 Back to the fire

If the flowers thing all sounds rather tame, then the evening of the 19th should warm you up again with the fire parade.

The devils run the streets at this point with the Cabalgata del Fuego, which involves people dressed as the devil, complete with horns and demon masks, running through the streets of Ruzafa and Colon, armed with large fountain type fireworks, they use large mechanical devices and creatures to emulate the devil trying his hardest not to be remove from the city, don’t stand too close as you’re likely to be showered with sparks, although this doesn’t seem to put the Spanish off !!

This parade usually starts at around 7pm, don’t miss this spectacle, you won’t have seen anything like it anywhere else in the world!!

This is the night when the city literally comes alight !! The first bonfire is lit at around 10pm, with the smallest first, and the largest being set alight well after midnight, don’t get too close as these get tremendously hot, and remember that these are often filled with firecrackers to really get them going…… this is going to be noisy !!!

And what festival doesn’t have its fair share of local food and drink on offer and Las Fallas is no exception!

Not only are mouth-watering traditional Valencian Paellas on offer, but you can sample various street vendors selling Bunelos, a traditional round pumpkin doughnut, or for those in need of an  extra sugar fix, try the delicious Churros with thick hot chocolate dipping sauce……Yummy!! 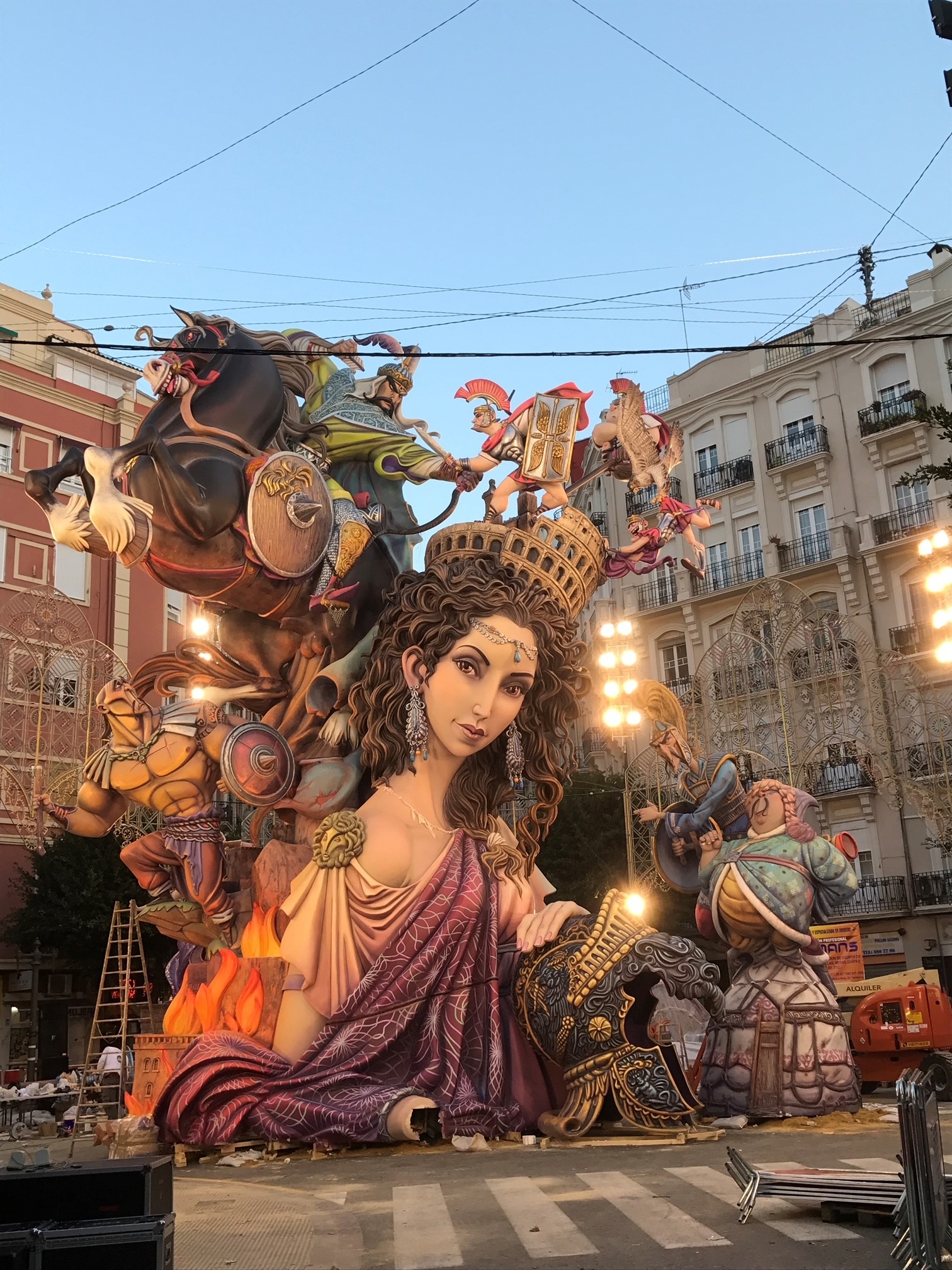 So, there you go, my whistle stop guide to Las Fallas, give it a go, you won’t be disappointed, and after all, there’s a stunning sandy beach to relax on and give your eardrums a break if it all gets too much !

You can fly direct to Valencia Airport, which is located just 8KMS from the city centre, from all over Europe, with budget airlines such as EasyJet and Ryanair providing daily affordable flights.

Valencia is also well connected to the larger cities of Barcelona and Madrid by rail, so if rail travel is your thing then make sure you also explore these amazing cities too,