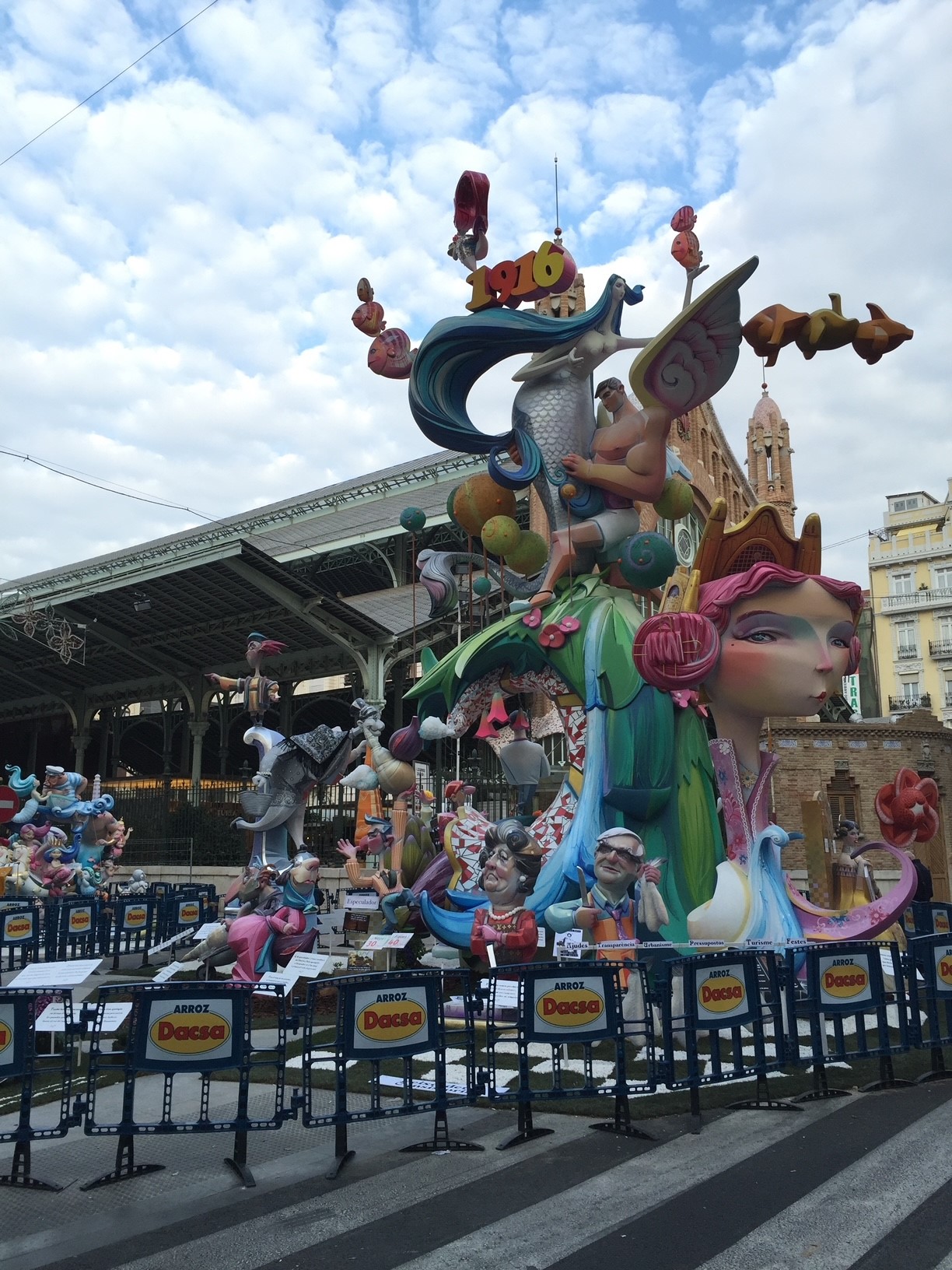 Valencia is home to a mix of amazing architecture, from traditional balcony clad city centre buildings right up to state-of-the-art space-age construction, but that doesn’t stop them from celebrating a good o’l fiesta, if there’s a nation that loves a party then it has to be the Spanish, and every March the city comes alive with the return of Las Fallas, quite possibly the loudest party on the planet

Las Fallas is a festival celebrated every March 1st to the 19th, a bit like a traditional UK bonfire celebration but much bigger, certainly a lot noisier and goes on for much longer,
It is to celebrate the arrival of spring, this fiery fiesta is to mark the feast day of a saint, San Jose, although the festival is called Las Fallas which huge cardboard and paper effigies are collectively called.

Origins of Las Fallas are thought to be from way back in medieval times when carpenters would sweep up their shavings and waste wood and create a bonfire which would then be burnt on the feast day of San Jose, their patron saint.

Rivalries soon grew, and bonfires became bigger and bigger and began to include giant effigies called Ninots, which forms part of the Falla. These amazingly detailed structures are dotted all around the city and on the last day of the festival, the 19th March, they are all filled with firecrackers and set on fire!!

The festival kicks off in style at the end of February with La Desperta, which basically involves a parade of people walking through the streets of the old town, from around 7 am, throwing firecrackers onto the road and ending up in Plaza Del Ayuntamiento, the old town square, they have huge marching bands walking alongside them. Now that’s what I call an alarm call!
When they arrive in the town square, they set off even bigger and louder firecrackers, before they all head off for breakfast, then the city returns to normal, for a few hours anyway, until things are really hot up, for the daily Mascletas at the same town square each day at 2 pm. 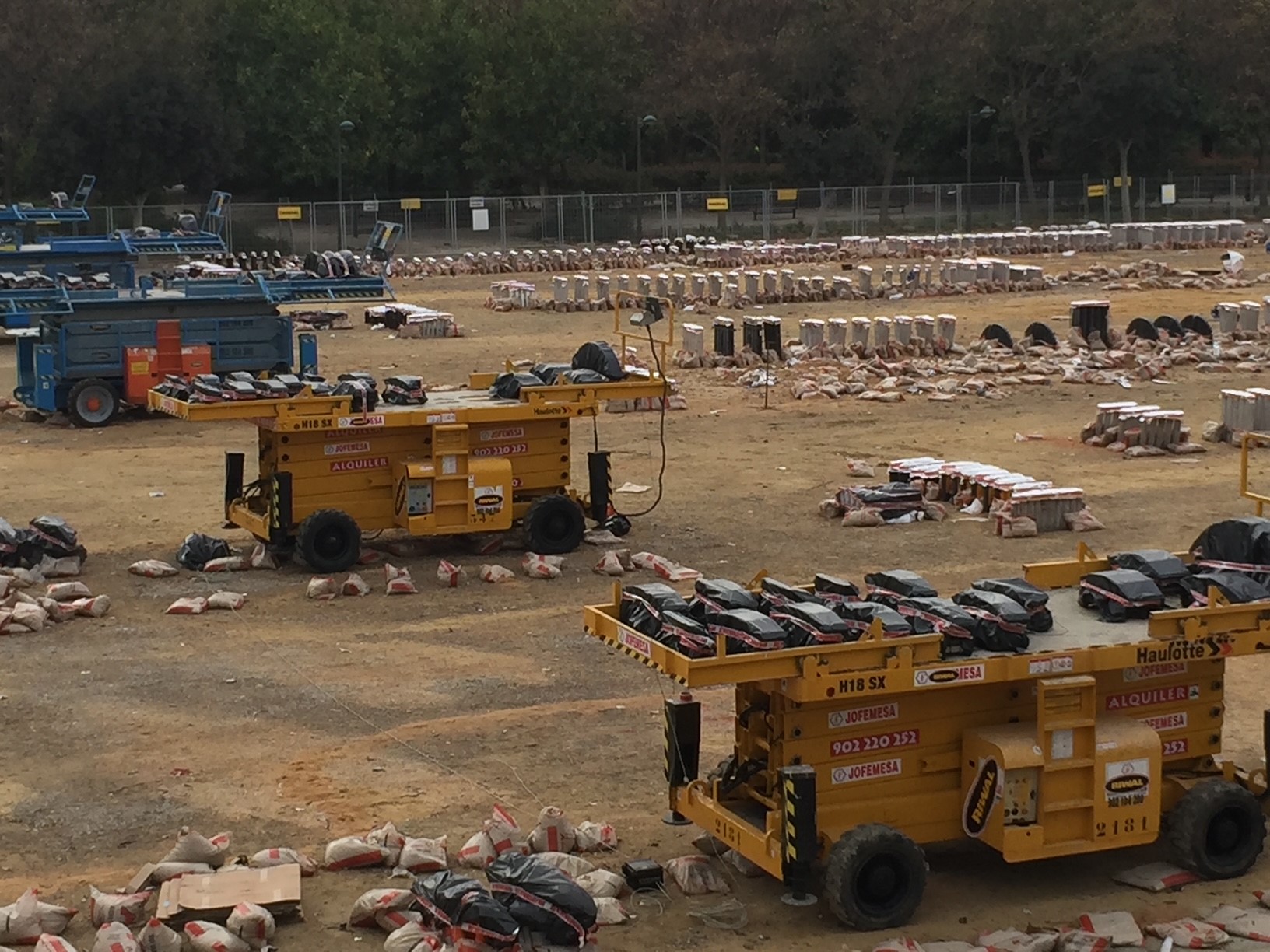 These Mascletas take place every day from 1st to 19th March, being fired by firework companies from all over Spain, it doesn’t matter that its blue skies and glorious sunshine because these firework displays are all about the noise and the smoke, and boy is it loud!!!

Each display only lasts about 7 – 8 minutes, but I’m not sure your eardrums could take much longer anyway, it has to be witnessed to be believed, feeling the stone streets vibrate under your feet and that thump in your chest as each maroon shell climbs into the sky before bursting into a bright white puff of smoke is utterly amazing.
Whistles, screamers and bangs of all calibres make up these shows, which are sometimes accompanied by coloured smoke shells and paper streamers, fired over the spectators’ heads, and yes, these lots of spectators, for the main shows from the 15th – 19th march the crowds are 200,000 strong, disappearing off down the streets in all directions, if you want a front-row spot, you will need to be in the square at around 11 am for a 2 pm show, lots of waiting around, but perfect time to top up the tan and sample the local food and drink and soak up this amazing Spanish atmosphere.

But that’s not the end…

If you’re a fan of more traditional firework displays then the nights of 15th – 17th March will appeal to you, but you will have to stay up late! These displays are fired from The Turia Gardens, by Paseo de la Alameda, and take place at 1 am each night, and are watched by over 100,000 people, these typically Spanish displays contain some of the best firework effects seen anywhere in the world, a true masterpiece of sound and colour!!.

But…The biggest night of all is the 18th March, or the Nit del Foc, which translates to Night of Fire!!, this is when the largest display is fired, lasting almost 20 minutes, culminating in hundreds of loud maroon shells being fired in quick succession creating loud thunder type bangs and bright white flashes in the sky, you can feel the vibrations from several hundred yards away.
And then, on the 20th, the city returns to normal everyday life, typically Spanish sedate way of life, and the planning for next year’s festival begins